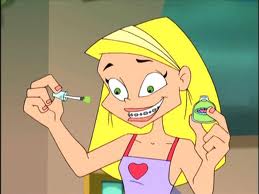 Sharon Esther Spitz is a fourteen-year-old, ninth grade, high school student. With green eyes and waist-length, blonde hair, it is difficult to believe that she has what she feels is a difficult time in her life. She wears a light-blue shirt and dark-blue pants and has waist-length blonde hair, usually found with a light-blue clip in it. She has a tan skin tone, bright green eyes and also sports unusual silver braces. They sometimes cause trouble for her. In her later years, she wears dark blue jeans and a bright pink shirt with a light green necklace. She always tries her best to help others.

A vegetarian and animal rights activist, Sharon has five pets. Two dogs, Pigger and Sampson, and three cats, Moshie, Roxie, and Lawrence. She hopes to be a veterinarian when she grows up. She is very serious about wanting to excel in this profession, as she volunteers at a local animal hospital. Sharon wants everything a teenage girl wants: to be popular, get good grades, hang out with friends, and have a boyfriend. Sharon sometimes does get into trouble and messes up like every other teen, but she always learns from her mistakes and sets things right in the end, no matter what the situation. Despite her cuteness and beauty, Sharon is also known to be a clumsy, ditzy girl and would usually end up embarrassing herself one way or the next. Sharon's rival is Nina Harper, her old childhood friend, who attends Sharon's junior, and later senior, high school. She and Nina used to be close friends as kids, but when Nina found her beloved dolls with their heads pulled off, Nina immediately blamed Sharon for the act despite her pleas that she did not do it. It is later revealed in the episode "Clean Slate" that Nina's cousin Petra was the perpetrator of the doll massacre. Nina has done everything to make her life miserable ever since. Sharon's traits are her clumsiness, ditziness, responsibility, caring, helpfulness, and so many more good, and some bad traits about her. Sharon's family members include her father Richard, her mother Helen, and her two brothers, Adam and Josh.

Sharon's best friend is Maria Wong, and her other friends are Connor MacKenzie, Alden Jones, Brock Leighton, Dion, Marlo, and later on, Alyson Malitski. She is not unpopular, but she isn't able to command the attention of her peers quite in the way of Nina and other girls. Sharon is the middle child in her family. Sharon's favorite singers are Leena and Taylor Knight, both of whom she met in person[1][2]. She was an extra in Leena's new music video and she learned she had a lot in common with her and she also learned from Leena that being a big star isn't easy as people think. Taylor Knight was not at all who Sharon thought he was, and he ended up being a guy who was full of himself and did not seem to really care about her. He was so arrogant that Sharon was glad when he canceled their date to her prom. Sharon had a huge, romantic crush on Alden early on in junior high, often finding herself struggling to form a strong and close, romantic relationship with him, even though he secretly returned her strong, romantic feelings and infatuations. They eventually become an official romantic couple when Alden ended up asking her out in the first episode. The two had a good relationship for about one year. However, early on in freshmen year, Sharon grew insecure because she believed that Alden wasn't interested in her. This insecurity ended up causing her to screw up their relationship, and Alden eventually broke up with her. Despite that, after the wounds of the breakup had healed, they maintained a strong, platonic relationship. In the final episode, Alden realized he still had feelings for her and worked to rebuild their relationship, saying it was his mistake to end it[3]. He made the effort in making his feelings known to Sharon and soon finally told her exactly how he felt. Despite Sharon's hesitance, not wanting to risk ruining their friendship, she accepted and they got back together.

Although Sharon is innately clumsy and is dubbed a 'sports wimp' by Maria in many episodes, she can be quite capable of very demanding, physical exertions. According to Alden, Sharon is a better dancer than Maria, as he calls her the "best dancer he knows".

When Tess and Liane had smashed in the door to Sharon's Locker, jamming it closed, she opened it by pulling the door open with her hands.[5]

Sharon is quite an accomplished student in both English and creative writing. Adam even says it is easy for her to win English assignment awards[8] and their mom, Helen, says that Sharon has always consistently gotten A's in English.[7] However, her grasp of science and math is particularly weak by comparison, barely scraping through with a C average.[9][10] But if she really applies herself, she is capable of excelling, since she worked out a complicated math proof in the space of an hour.[9] Sharon has a high level of skill at cooking and preparing food. Josh, in particular, is fond of her culinary creations, specifically, her oatmeal cookies. Since her father, Richard, is well versed in the culinary arts, she may have learned these skills from him. Sharon is good at driving vehicles. In just half an hour, she became a better driver than Adam, who had at least a year of practical experience. She did crash the car though, but only because she was unfamiliar with which pedals to press. Even so, she had enough skill to control the crash so nobody was injured. The car was even capable of being driven after the crash with no ill effects on its performance.

She has a preference for Butterflies as a personal motif.

Incidents with Sharon's braces fall into one of these categories: 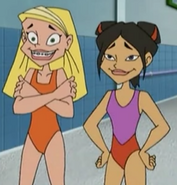 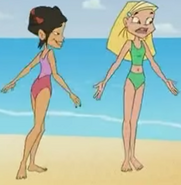 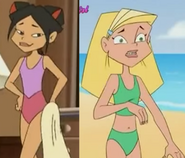 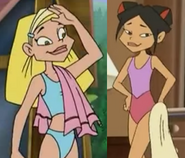 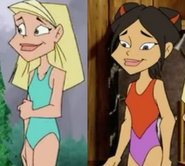 Add a photo to this gallery

Retrieved from "https://braceface.fandom.com/wiki/Sharon_Spitz?oldid=9649"
Community content is available under CC-BY-SA unless otherwise noted.